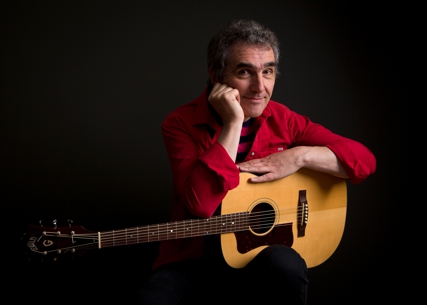 As part of The Pitmen Poets (with Bob Fox, Benny Graham and Billy Mitchell), Jez has helped to rekindled the fire in the tradition of mining songs and culture of his native region in a series of sell out theatre performances around the UK, which will continue with a thirty-date tour in early 2017.

A double nomination in the 2015 BBC Folk Awards – for best singer and best new song – was a timely reminder of Jez Lowe’s standing in the UK folk and acoustic music scene. Not only he is one of the busiest live performers in the country, but his songs are among the most widely sung by other performers, whether by long-established acts like Fairport Convention, The Dubliners and Bob Fox, or by the new breed of stars like The Unthanks, The Young Uns and The Duhks.

Jez’s own long-established band The Bad Pennies (featuring Kate Bramley, Andy May and David De La Haye) continue to attract a huge following, and his other collaborations with The Pitmen Poets (with Billy Mitchell, Bob Fox and Benny Graham), The Broonzies (alongside fellow-veterans Maggie Holland, Chris Parkinson and Roger Wilson), Men at Words (with James Keelaghan and Archie Fisher) and with fellow-songwriter Steve Tilston, show a willingness to push boundaries and venture boldly into pastures new. 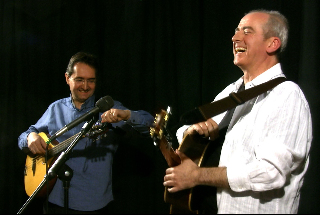 Herts-based duo na-mara are described by Folk London as “elegant and skilled musicians”. They perform in clubs and festivals across the UK and have in recent times performed in France and Spain, and featured in broadcasts on BBC Radio 4 as well as many local radio stations. Their music includes self-penned songs in traditional style on contemporary and historical topics; traditional songs from the British Isles; their own translations of songs from the Breton, French and Quebecois traditions, and tunes from Brittany, France and the Spanish Celtic regions of Asturias and Galicia. They are well known for their songs about the Spanish Civil War and maintain close ties with the International Brigade Memorial Trust.

Paul and Rob are good friends of our club and Paul was a judge at our 2016 Song Competition. It’s always a great night when na-mara spend an evening with us. 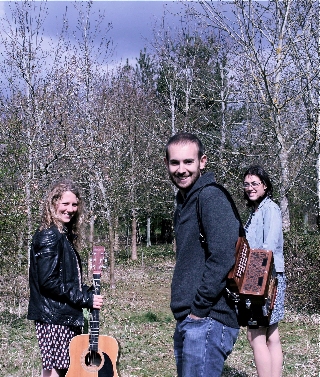 The Foxglove Trio is a group of multi-instrumentalists who perform mostly traditional songs from around the British Isles in English and Welsh. Gathering material from sessions, published song collections and contemporary artists, these talented musicians are making a name for themselves on the UK folk scene for their beautiful harmonies, creative new arrangements and engaging live performances.

“This talented trio deliver a delightful variety of music and song. Their arrangements are really fresh and inventive. This Foxglove deserves to flower on both sides of the border.” Frank Hennessy, BBC Radio Wales

“Rosie & Rowan are at the forefront of the modern folk scene individually; together they form a powerful partnership that will surely accelerate their rise to the top. Songs crafted of the highest quality, sensitively delivered with haunting harmonies and a cheeky smile!” – Heard And Seen

Rosie is a folk singer/songwriter from Midhurst, West Sussex. Having grown up surrounded by traditional music (and dancing with Knockhundred Shuttles!), her voice possesses a naturalness and maturity, bringing “a ruby-richness to lyrics new and old”. (Folk Radio UK)

After winning the newcomer competition at Ely Festival in 2011, Rosie worked hard to carve out her niche on the UK folk circuit. She released her EP “Somewhere North” in 2012 and has since played numerous festivals and folk clubs across the land. In 2013 she was nominated as a finalist for the BBC Radio 2 Young Folk award before joining the up-and-coming London-Irish band CrossHarbour, who subsequently released their eponymous debut album.

Rosie is currently touring her debut album ‘Rise Aurora’ with fiddle-singer Rowan Piggott and we are delighted to welcome them back to Watford Folk Club again. 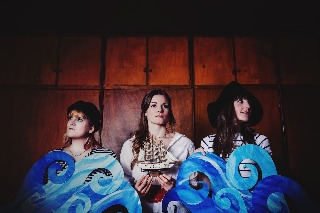 Said The Maiden are Jess Distill, Hannah Elizabeth and Kathy Pilkinton, three friends who discovered a mutual love of folk music when they reunited several years after spending their school years together in St. Albans, Hertfordshire. The group sing traditional songs from around the UK and America, often in three part acapella harmony but also using guitar, violin, mandolin, woodwind, accordion and percussion to embellish their sound.

From tentatively performing a few songs at their local Redbourn Folk club in 2012 and later being asked to appear at one of the club’s guest nights, the group soon secured support and headline slots at folk clubs and festivals around the country, including Folk By The Oak, Folkeast, Gate to Southwell, Shepley and Bunkfest. These opportunities have in turn led to invitations to support many fantastic artists including The Fisherman’s Friends, Jim Moray, Megson, Martin Carthy, Sam Carter, Hannah James and Sam Sweeney, Treacherous Orchestra and Clannad.  They were also honoured to join legendary fiddler Dave Swarbrick on a successful UK solo tour in the spring of 2014, and released their début album ‘A Curious Tale’ in June of the same year. 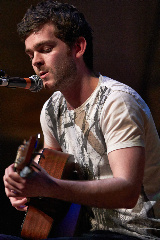 “An impressive debut album from the Midlands musician, who has a neat finger style technique and a sweet voice” – The Daily Telegraph ★★★☆☆

Chris’ trademark solo live sound is at times likened to the magnitude of a full orchestra only to moments later pull audiences to the very edge of their seats to soak in the delicate spider-like touch of his finger style guitar playing. 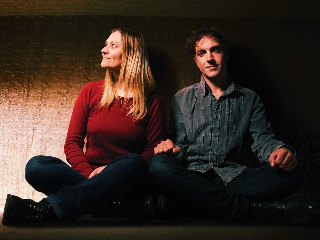 Vicki Swan & Jonny effortlessly blend traditional material with contemporary sounds. Their performances showcase new interpretations of old songs alongside original self penned tunes and new contemporary songs that are entirely at home in the tradition.

Out of this combination they have developed a sound that is both familiar and fresh.  Strong believers in letting the music tradition live and breathe through sensitive interpretation, Vicki and Jonny allow the melody to sing without any constraints.

Be entranced by the haunting nyckelharpa, amazed at the cow horn (one of the worlds earliest communication devices) and meet some of the bagpipes that didn’t come from Scotland.

Suitable for all ages, their evenings are packed with toe tapping tunes and songs of love, death, trains and dressing up (not always at the same time) all presented with sparkling gentle humour, lots of smiles and skilful musicianship. 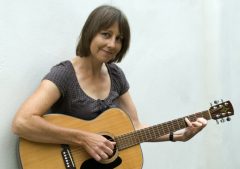 “This is folk music for everyone – An exemplary, unique album.”  Spiral Earth
“Spellbinding… Hannah & Ben were born to play and sing together.” fRoots –  Critics Poll Album of the Year Runner Up 2016
A stunning voice of unaffected beauty, with a range, elasticity and purity so rarely encountered in the modern folk landscape. Equally adept at delivering love songs like I Gave My Love a Cherry with intimacy and simplicity as she is at telling a dark murder ballad like Miles Weatherhill with real intensity and drama; Hannah’s deep understanding of traditional song shines through.
Influences from her life on both sides of the Atlantic can be heard throughout her arrangements, which breathe new life into a collection of well-loved folk songs.
Rapidly becoming known for her captivating, intimate live performances, Hannah is appearing with Ben Savage at Watford Folk Club as part of their UK tour.
http://www.hannahbenmusic.com/
http://www.hannahsandersfolk.com/