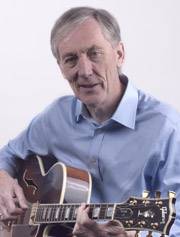 This event now has a suggested minimum donation of £8

Chris Flegg is a singer, noted guitarist and song writer based in St Albans.

Originally from Eastleigh in Hampshire, he moved to London to graduate in physics from Imperial College, becoming involved first with Imperial College Folk Club and later the Troubadour Folk Club, where he became co resident with Redd Sullivan and Martin Winsor.

This started his song writing and solo work and at the same time he took an interest in jazz, notably through a chance meeting with guitarist Diz Disley, and went on to be involved in bands covering a wide range of styles including gypsy jazz, mainstream and Dixieland jazz, as well as playing pop covers in a number of dance bands and groups.

Moving to St Albans in 2000 he discovered the local folk scene through meeting singer/guitarist John Breeze and became resident at John’s Windward Folk Club alongside songwriter George Papavgeris and this rekindled his urge for song writing.