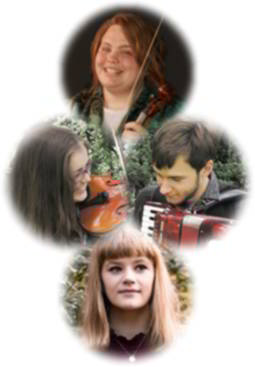 Nancy Potts:
A singer & fiddler, Nancy was brought up firmly in the folk world. The daughter of ceilidh musicians and Morris dancers, she specialises in playing for dancing and sings a variety of songs both for performance and social settings.
She has played and called ceilidhs and has been a musician for Morris Offspring. She had a lead part in a show called “Canals of Old England” which combined song, music and storytelling. She also teaches with “Shooting Roots”.
Nancy was unfortunately unwell and couldn’t make our previous New Roots night, so we’re pleased that she is recovered and able to be with us tonight.

Missing Richard is a folk duo consisting of Tom Evans on piano accordion and Harriet Barton on violin. They play tunes ranging from the British Isles, to Quebec, to Sweden, with a few stop offs in between and some self-penned material. They play at folk clubs in Sussex and also for play for ceilidhs where Harri mostly calls. Both are very involved with Shooting Roots and have enjoyed 6 years of tutoring with them and being part of the team.

Heather Ferrier is an Accordionist and Clog Dancer from Stockport, based in Newcastle. She started her musical education in the Fosbrook Folk Education Trust where over a period of 11 years she learned accordion, piano and clog dancing. With them she has travelled and performed at festivals across the UK and Europe. Heather completed the Folk and Traditional Music degree at Newcastle University and graduated in 2018.
Heather is part of the all female contemporary folk quartet “Balter” who released their second EP in 2018and also plays with Bodhran player Callum Younger in the Duo R?NN. She has also been fortunate enough to be part of the group Superfolkus led by Kathryn Tickell.

We look forward to hearing these exciting new artists who are just starting their musical journeys and to welcoming them to Watford.
Do come along and support them – they are the future of Folk Music!