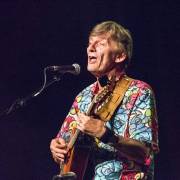 He was the founder member and visionary force behind three particularly ground breaking groups – The New Victory Band, Bandoggs and Red Shift – all of which brought something new to the folk scene.