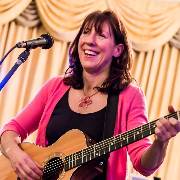 WFC is thrilled to invite back Bournemouth based performer, Polly Morris.

Those of you who’ve seen her before will recall her comedic style and witty delivery but she does do serious too!

…the album, like its predecessor, confirms Polly to be at the very top of her game and a writer of comedy songs that are going to be very hard to beat. It contains some new sounds, some songs with a blues feel and a maturity in the musical performances of the individual band members when playing together.

Polly is a great friend of the club, helping judge last year’s Folk Sing Competition and has also appeared locally at St Albans Folk Festival and supporting Julie Felix at Rickmansworth Folk Festival. Polly describes her work as ‘music to make you smile’ and we agree!