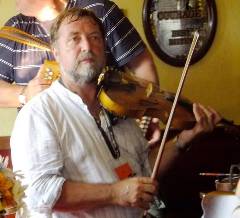 Tim Brooks performs solo at folk clubs, social events and festivals. His solo repertoire is a mix of traditional/traditional-style songs and fiddle tunes, mostly from the British Isles, but with other influences mixed in.

Tim’s songwriting credits include “The Devil in York” and “So Far From Home”, both of which have been performed and recorded by several other artists, not least by Jim Mageean and the late, great, Johnny Collins. Tim accompanies himself on fiddle, guitar and occasional other instruments.