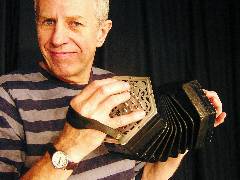 Event is Cancelled
John has been struck down with a bad cold which has totally taken his voice away which means he won’t be able to perform.
We will run one our well known sing-arounds instead

If you’ve purchased tickets via  WeGotTickets you can either choose to be refunded or reallocate your tickets to a future event.
Contact us for details

We will book John to appear sometime next year.

John Kirkpatrick is one of the most prolific figures on the English folk scene, performing solo, in duos, acoustic groups and electric bands, and has established an enviable reputation as an instrumental virtuoso (melodeon, Anglo concertina and button accordion), as well as a leading interpreter of English folk music.

He has been a member of the Albion Country Band, Magic Lantern, The Richard Thompson Band, Umps and Dumps, Steeleye Span, Brass Monkey, Trans-Europe Diatonique, and Band of Hope, as well as numerous ceilidh bands