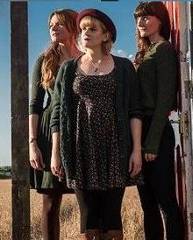 Said The Maiden are Jess Distill, Hannah Elizabeth and Kathy Pilkinton, three friends who discovered a mutual love of folk music when they reunited several years after spending their school years together in Hertfordshire.

After tentatively performing a few songs at their local Redbourn Folk Club, they soon gained a great deal of interest on the folk circuit, securing major support and headline slots at folk clubs and festivals around the country.

In 2017 they won the Folking Awards ‘Rising Star’ prize, and an NMG Award nomination for best Acoustic, Country & Folk act, also making their first international appearances, at the 60th Jazz & Joy Festival in Worms, Germany and at Costa del Folk in Portugal.

Their second studio album “Here’s A Health” was released in Autumn 2017, with a national headline tour.

Hannah, Jess and Kathy have become great friends of the club and have always given us great performances.

However, things move on and this will be one of Hannah’s last gigs with the band as she is moving on to a new project, so do come along and see the current line-up while you can.