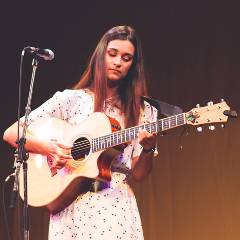 Kelly Oliver is a singer-songwriter, guitarist and harmonicist, hailing from Hertfordshire and described by The Times as an artist who ‘blends traditional with bold, indie-pop’.

She came to performing music a little later in life than many other of the rising stars of the UK music scene. After graduating from Royal Holloway, University of London and then travelling around Europe, Brazil and Argentina, her passion for folk music was ignited with a visit to Ireland.

It was there that she was exposed to traditional Irish folk music, and with her Grandmother having been born in Tralee in Ireland, Kelly was heavily drawn to the culture and especially the traditional music, played live with intricacy and passion.